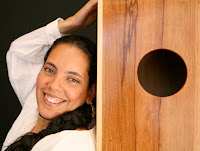 Monica Rojas (Lima, Peru) is a doctor in cultural anthropology. She has conducted extensive research on the cultural traditions of the African descent population in Peru. Her academic work focuses on ethnomusicology, performance, the African Diaspora, Latin America, Peru and the Spanish Caribbean. Rojas is a Peruvian national dance champion in Marinera Limeña. She has contributed as choreographer, cultural consultant, dance and music instructor, guest artist and scholar in Peru to the Francisco Congo Black Movement, Center of Music and Dance of the Catholic University of Peru (CEMDUC), Yuyachkani Cultural Group, and Centro de Desarrollo Étnico (CEDET) among others; and in the U.S. to the University of Oregon Dance Department, Oregon State University Music department, University of Washington Ethnomusicology Division, Seattle Theatre Group, Langston Hughes Performing Arts Center, and diverse youth and adult educational programs.

Rojas is currently the International Advisor for the Museo Afroperuano de Zaña, Peru as well as the founder and director of DE CAJóN Project. Through this project Rojas has combined her anthropology degree and artistic knowledge to bridge local and global efforts that promote and educate about the cultural contribution of the African descent population in Peru.

“Within the pantheon of Afro-Peruvian culture Monica Rojas is an innovator for she repeatedly takes risks by creating original works that push the boundaries of the cannon. By being a percussionist, bandleader, and project director she is redefining the role of women within the Afro-Peruvian community. By exploring the dynamic instruments of her tradition to speak on colonialism and globalization Monica has redefined what it means to be Afro-Peruvian in Seattle or Peru for that matter”